A Sweet Scheme: How A 108-Year-Old Vision Makes Hershey Look Beyond Profit

The headquarters of the Hershey Choclate Company August 7, 2002 in Hershey, Pennsylvania.  (Photo by Spencer Platt/Getty Images)

Days before Wilma Alicea-Hernandez was scheduled to start her new job as a retail sales representative with The Hershey Company, disaster ensued: Hurricane Maria destroyed her hometown in Puerto Rico, leaving Hernandez and her family with no water, electricity or cell service. In the aftermath of the storm, Hernandez had to go more than 40 minutes out of her way just to find a signal so she could text her new boss. I still want to work for Hershey, she said, but I can’t leave the island right now.

The 22-year-old meant this literally: commercial jets weren’t getting into or out of the American territory.

Fortunately for Hernandez, Hershey employees had mobilized on their own, without the guidance of upper management, to send a company plane full of supplies to San Juan. By October 6 – three days after Maria’s official end – Hernandez was on the jet for its return flight to the States. What greeted her arrival was nothing short of a white glove new-employee orientation: her colleagues put her up for a night at the five-star Hotel Hershey before buying her a train ticket to her new job in New York City; once in New York, a furnished (temporary) apartment was waiting for her, filled with essentials so she and her family could transition to their new life.

The whole episode will cost Hershey about $9,000 – not including the supplies that they donated to San Juan before rescuing Hernandez – but the company doesn’t see its effort as anything above and beyond what the situation necessitated.

“Wilma Alicea-Hernandez’s experience was truly extraordinary,” says CEO Michele Buck, “but it doesn’t surprise me. The actions of our colleagues across the business is a reflection of Hershey’s culture.”

A likely line from a corporate chieftain, yes, but Buck and her compatriots at Hershey have good reason to tout the confectionary giant’s “unique” corporate culture: because it is largely mandated by a deed set up by their founder, Milton S. Hershey, in 1909. In this deed, Milton left control of his company in the hands of a charitable trust that would benefit an orphanage for boys. The orphanage has since become a K-12 school for impoverished boys and girls, but the rest of what Milton set in motion remains in place: To this day, the Hershey Trust, which is worth $13.8 billion, has an 80% voting interest in the company and receives about a third of Hershey’s dividends.

While the Trust doesn’t exactly have a pristine reputation in Hershey’s home state — last November, the Philadelphia Inquirer accused the Trust of spending stingily on its students while enjoying an endowment larger than that of the University of Pennsylvania, and earlier in 2016 the entity was asked by the Pennsylvania attorney general’s office, which provides oversight to the Trust, to reduce board compensation and change three of its directors — it has nonetheless acted as an unconventional poison pill, spurning outside suitors (like Mondelez, or even Wrigley in the 11th hour of an auction it had helped engineer in the early aughts) and keeping the company’s focus on its operations.

“They’ve always had an influence,” says Morningstar analyst Erin Lash, who’s covered Hershey stock for nearly ten years. “We view the oversight of the Trust as essentially ensuring that Hershey is operating such that it wouldn’t jeopardize the stable cash flows.”

Hershey executives use much more saccharine language to explain the Trust’s (and school’s) effect on its business.

“At a time where so many companies are looking for purpose, The Hershey Company is kind of the original purpose-driven company,” Buck says, noting that this purpose tends to attract a certain type of employee, one who is drawn to the Hershey mission. After all, Milton “left the company in trust, in perpetuity, to fund an orphanage for disadvantaged kids. I mean, who does that? What other story is there out there, of a person who would be so generous?”

Milton S. Hershey was what many labor historians call one of the original welfare capitalists. He didn’t just build a company; he established a town. He made houses for employees, allegedly declaring, “Every man ought to own his home if he can. We can build a few to rent but let’s make the rents low.”

It is in this mold that Buck, Hershey’s first female CEO, is leading the company. Despite all the portraits and framed photos of Milton that litter Hershey’s corporate campus (and its museum, and its school, and its hotel), Buck and her deputies don’t let their founder’s ghost or his trust dictate their every move. Partly because some of the benefits Hershey now offers (benefits that helped the company rank #50 on the 2018 Just 100, like a 401k match that is 4.5% of pay when employees contribute at least 6%, in addition to a core contribution of 3% of pay for employees) were but a dream when Milton laid the groundwork for the chocolate company in 1894.

But also because Buck is her own executive with her own ideas about how to engage her employees — every one of them, from the line of Kit Kat manufacturing plant to the newly-carpeted floors of the converted corporate offices at one of Hershey’s former chocolate factories. To wit: she listens. Since becoming CEO in March, Buck estimates she’s gone on more than 15 “listening tours” at Hershey plants and operating centers around the country. 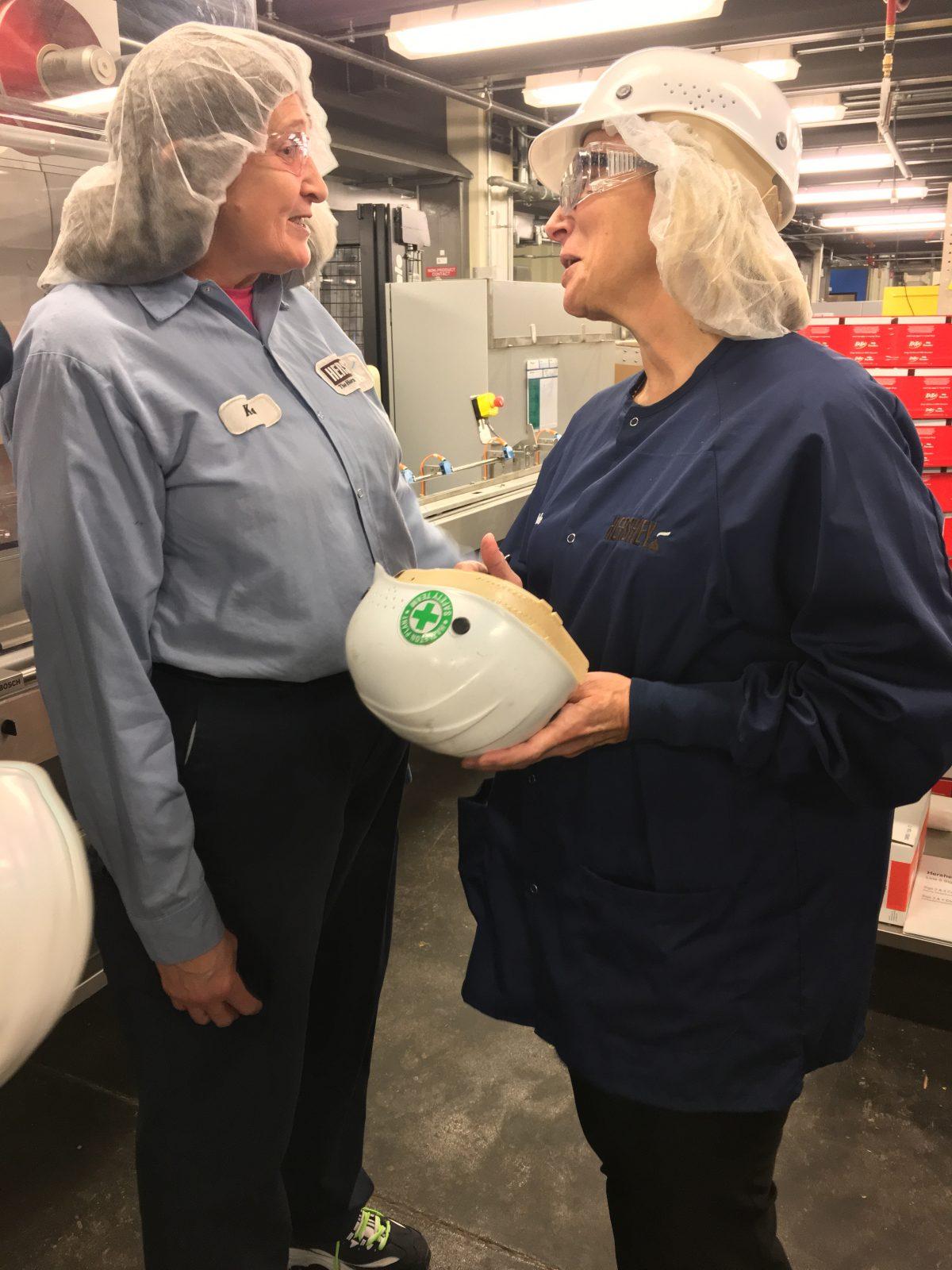 Hershey packaging Operator Michele Titus (L) talks to CEO Michele Buck (R) at the Hazelton, PA Hershey plant during one of Buck’s recent listening tours. Buck is Hershey’s first female CEO, and as such, was asked by Titus to sign her hard hat.

Buck does it because it’s mutually beneficial. “It’s a whole different perspective. To me, we always get to the best perspectives through diversity,” she says. “So the more different people across the company I can talk to, I feel like the better I can do my job.”

But according to Alex Edmans, the London-based economist whose research helps prove that the market provides long-term rewards to companies that treat employees well, Buck is doing more than soliciting feedback she can bring to her executive team. She’s engendering goodwill, and quietly building loyal workers by creating a valuable holistic benefit.

“These are things which are genuine. To write a check and pay somebody more, you can do that without a relationship, without a conversation, without even acknowledging what is the employee’s name,” Edmans says. “For the CEO to come down and listen to the people, and not just in a perfunctory box-checking way, but to really truly listen to concerns, these things are really important.”

Edmans’ own research found that companies that treat their employees well outperform those that do not — but good worker treatment is not a guarantee of high returns or high profit, especially in a consumer environment that has become hostile to sugar. In February, the company announced a 15% reduction in its global workforce, citing the need to improve profits. But after the confectioner’s third quarter earnings report in October, Wall Street fretted over Hershey’s guidance over its margin (“Some investors walked away a bit frustrated that management broke down their thesis for a year of enormous gross margin expansion in 2018 and worried that the pushback from retailers on order fulfillment represented another sign that food companies have lost negotiating power with customers,” wrote JPMorgan’s Robert Moskow at the time).

It is against this backdrop that the $13.8 billion Hershey Trust — the entity established by Milton and which benefits a school for impoverished children — is diversifying. In August, it sold off 4.5 million shares of common stock worth nearly a half-billion dollars. Directors for the Trust insisted that the sale was a sort of rebalancing of its holdings because the value of Hershey stock “in our overall portfolio has increased over the years because of the exceptional performance of The Hershey Company and the corresponding stock value.” The Trust is continuing to maintain the super-voting share that gives it 80% control of board decisions, and observers like Morningstar’s Lash says that even though “they’re potentially updating and adjusting the structure of the Trust, there’s nothing to suggest that that’s diminishing the influence they’ll have on the company.”

She’s not wrong. Buck believes firmly in the mission of the school and and the mission of Hershey’s founder — both of which the Trust is helping to safeguard. But even if the Trust were to disappear entirely, Buck says that that the demands of the 21st century consumer all but ensure she will continue to keep worker treatment at the center of what Hershey does.

“People expect it now. The millennial generation in particular, they want to know, ‘Who am I buying my products from?’” Buck says. “It’s more than just the product they’re buying, it’s, ‘What impact with every action I take in my life am I having in society? I want to know I’m buying a product from someone who cares about sourcing and who cares about the people who were involved in the product along the chain of production.’”

This article was written by Maggie McGrath from Forbes and was legally licensed through the NewsCred publisher network. Please direct all licensing questions to legal@newscred.com.